Those who book their trip through Bitbook.net Always benefit with a cashback. 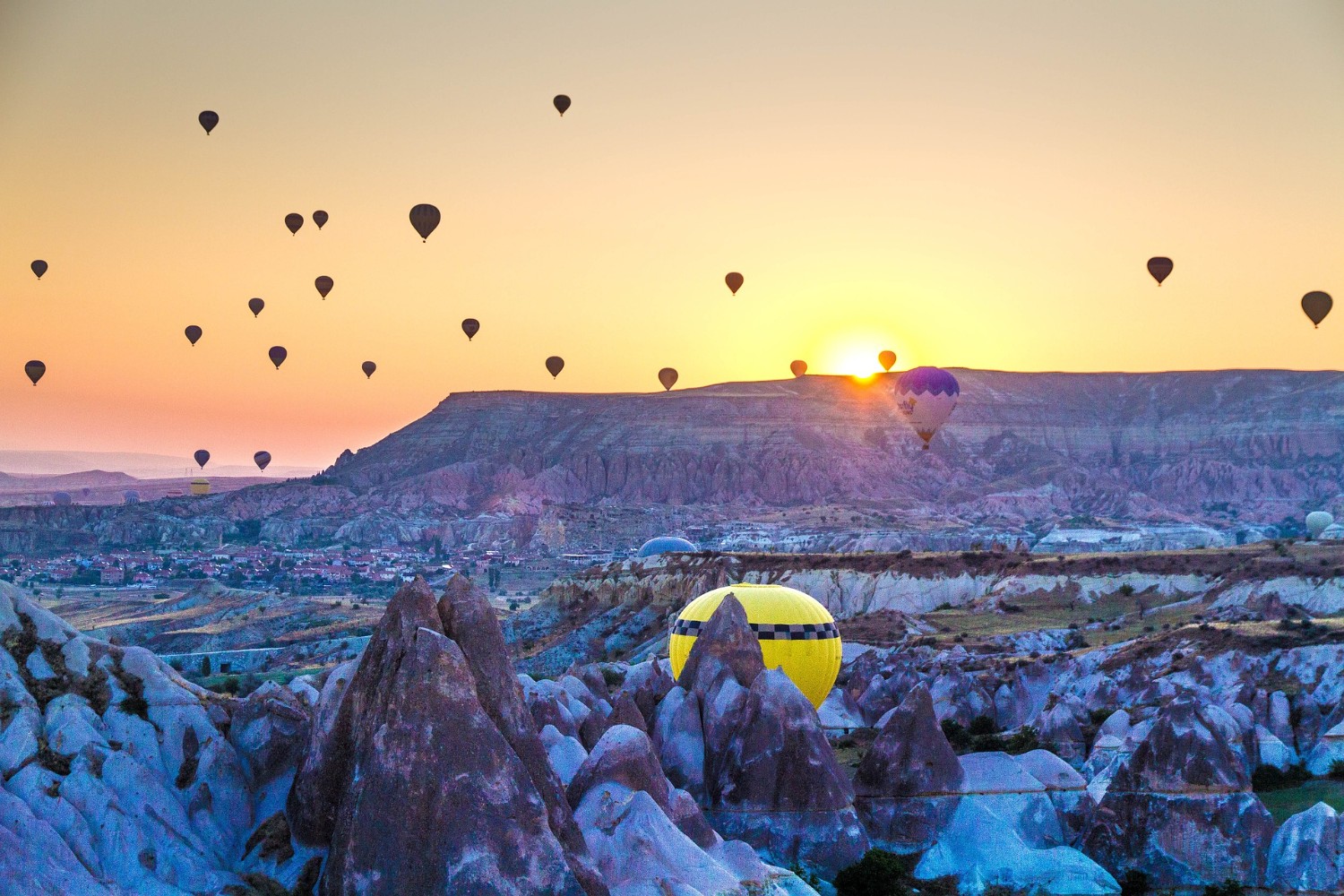 Cappadocia is one of the most beautiful region of Turkey, with amazing natural and historical beauties. The whole area is made up of cities, including Göreme, Ürgüp, Uçhisar and Avanos. More than a trip to admire stunning landscapes and fly through the sky in a colorful balloon, this region reserves for its visitors an immersion in Turkish culture (modern and ancient) it is a lot to learning,you will need to stay more than a couple of days to do that.

It is unquestionable that Cappadocia has a unique beauty. Its landscape is made up of colorful valleys, folds and interesting formations, known as Fairy Chimneys. The explanation for its rugged relief, very different from other landscapes around the world, is that the area is of volcanic origin and the combination of the eruption of some volcanoes. 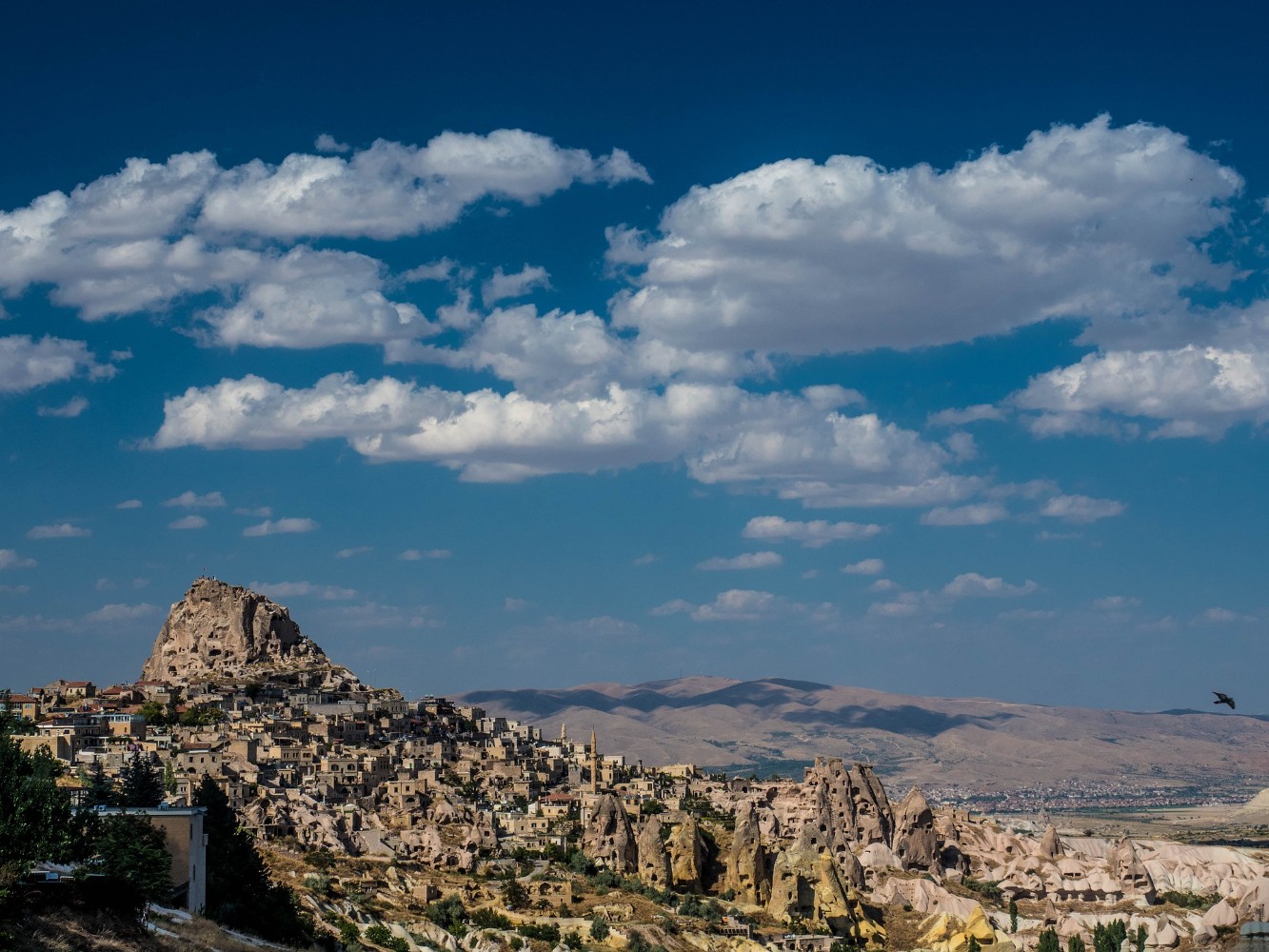 Cappadocia is a region made up of villages and varied tourist spots. The area is known for its natural beauties, which are countless, and one of the great local characteristics is its volcanic origin. The relief of volcanic stones, which is soft, combined with the effect of erosion, gave rise to very curious rock formations and allowed many constructions to be built in caves, another one of the symbols of the place. It is a place for those who like small towns, simplicity and nature.

This region holds a set of impressive landscapes: it has colorful valleys, houses built in caves, castles, underground cities, churches with secular paintings and rock formations, known as fairy chimneys. They are natural formations (mushroom-shaped, pointed or column-shaped), in which the top supports a rock larger than its "body". With such an amazing scenario, it is not surprising that the balloon flight is so successful.

Cappadocia is a region of Turkey with natural and historical beauties. The area is made up of different cities and towns, including Göreme, Ürgüp, Uçhisar and Avanos. More than a trip to admire stunning landscapes and fly through the sky in a colorful balloon, which would be enough reasons to justify the success of local tourism, the region reserves for its visitors an immersion in Turkish culture－modern and ancient－and a lot of learning !

It is unquestionable that Cappadocia has a unique beauty. Its landscape is made up of colorful valleys, folds and interesting formations, known as Fairy Chimneys. The explanation for its rugged relief, very different from other landscapes around the world, is that the area is of volcanic origin and the combination of the eruption of some volcanoes. 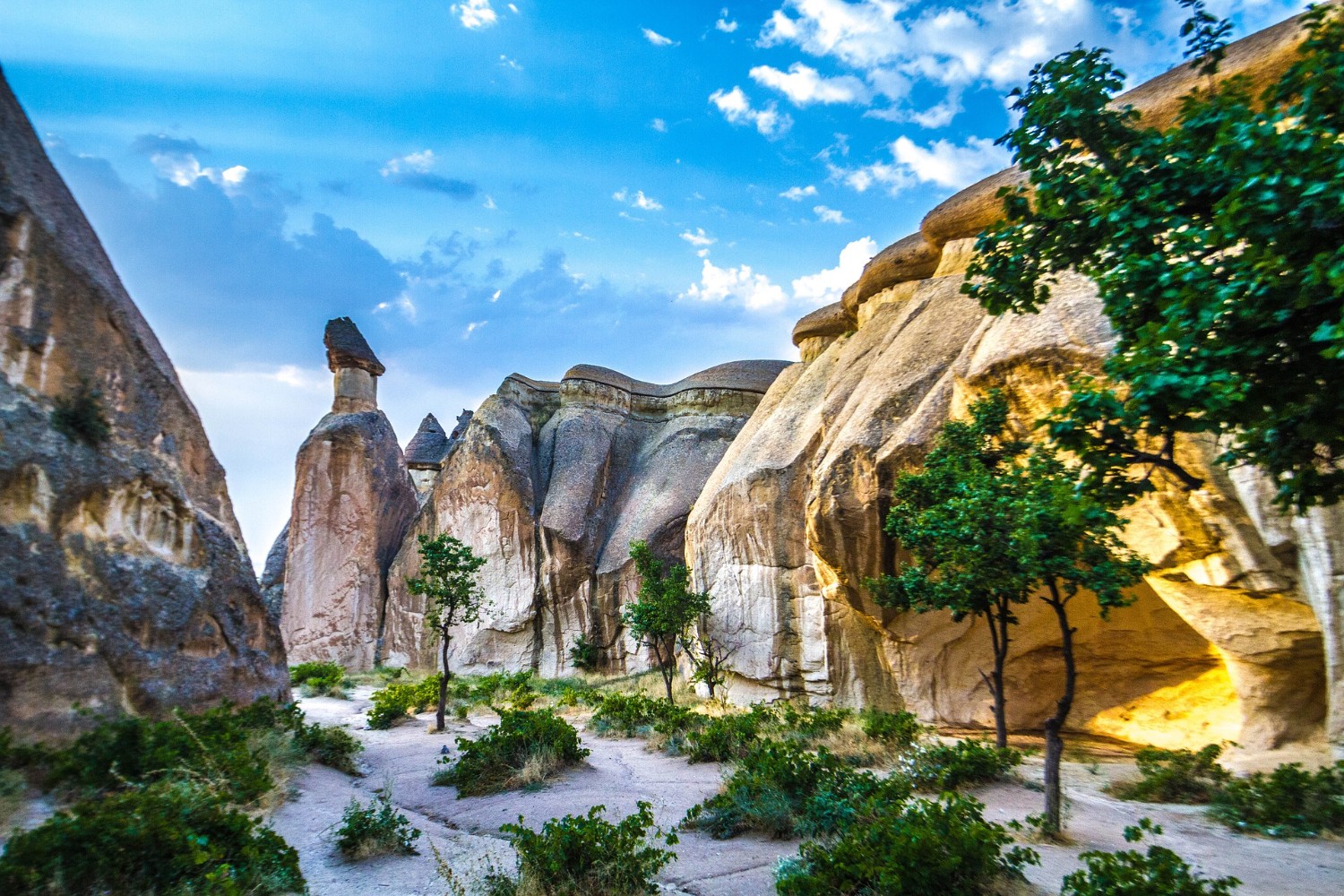 In addition to the flight, there are several other tours to take: in Göreme, which has about 6,000 inhabitants, pay a visit to the panoramic point of the city, because there you will have the opportunity to see the famous fairy chimneys and even observe some of them in formation; then visit the Göreme Open Air Museum, an “open air” museum, with several churches carved into the rocks, many of them with well-preserved interior paintings. Close to Göreme, you can also visit Paşabağ, which has huge fairy chimneys, Love Valley, with more fairy chimney formations and the Red Valley, with its beautiful sunsets.

There are so many natural beauties that many people end up forgetting the cultural and very important side of this region. Cappadocia has been populated for a long time and, among other things, it stands out for being a place where many Christians took shelter at a time when Christianity was not yet an accepted religion－its acceptance only happened in the Empire of Constantine. To protect themselves against persecution, Christians were forced to live in hiding and this is one of the reasons for the existence of underground cities, such as Kaymaklı Underground City and Derinkuyu Underground City, which is 85 meters deep and has 8 floors below the ground. 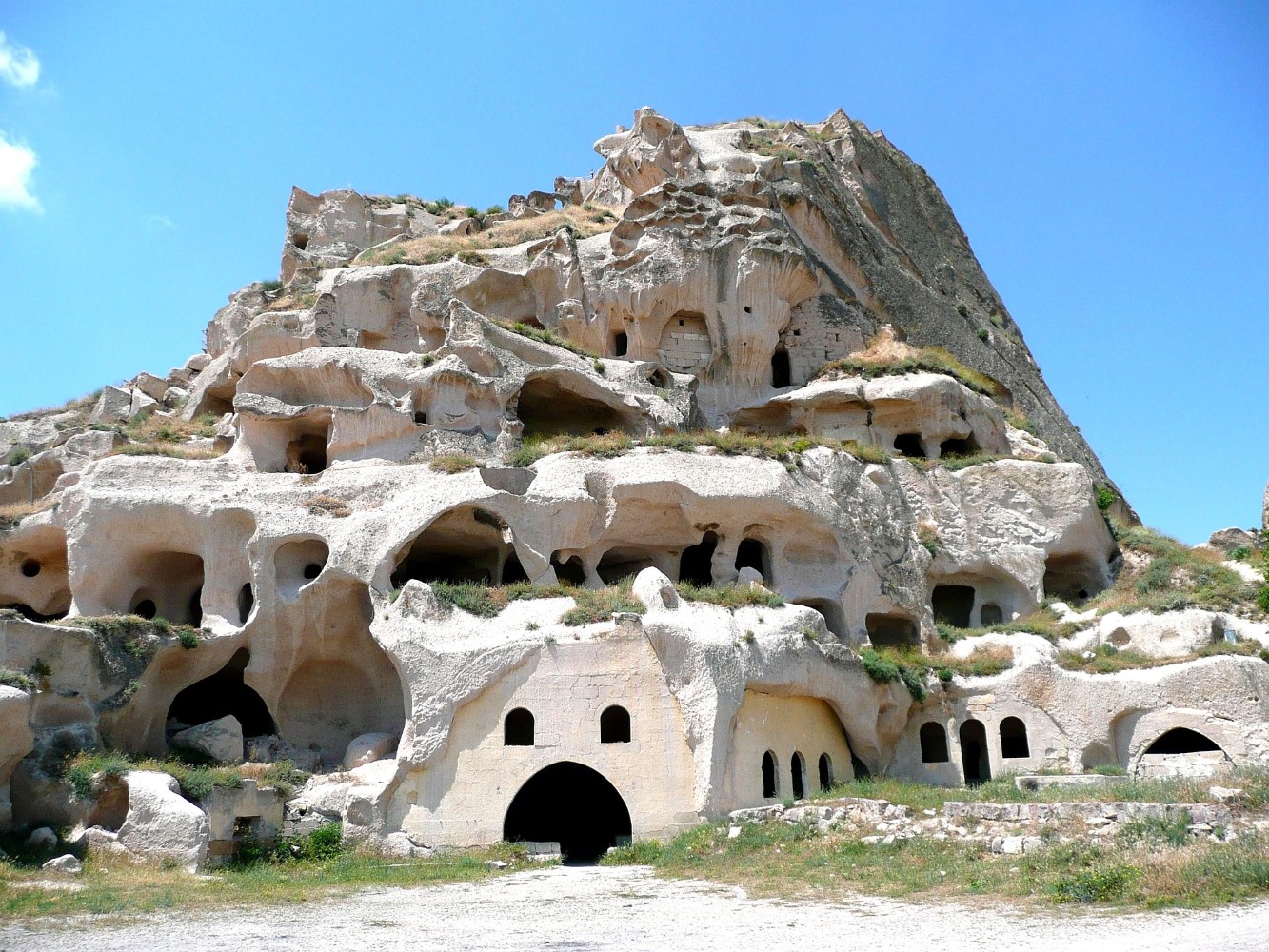 In Uçhisar, which has the highest point in the city and consequently a wonderful panoramic view, there is a very interesting castle, Uçhisar Kalesi, in Turkish. It has rooms that communicate with each other and, with its architecture, you can understand a little of the need that its former residents had to hide and protect themselves from attacks. A place with really nice architecture, because it is on a very steep slope, is Selime Cathedral, a huge religious temple, with halls and churches connected by tunnels. To stay in touch with nature, a beautiful walk is Ihlara Valley, where there is a canyon.

Cappadocia and the towns that make it up are small, so don't expect much from the nightlife; for those who like to enjoy the night, better enjoy it in Istanbul. There are some options in the region, but the best thing about Cappadocia is to enjoy the daytime activities, the walks, the landscape, the balloon flight... During the night, most people restrict themselves to dinner only, which is a good idea. idea to renew energies.

If you like the night and prefer something more lively than just dinner, a good idea is to go to Fat Boys Cafe, which works as a restaurant and bar and can be a good option to have a drink and relax. Another alternative for those who enjoy drinks is the Red Red Wine House, a bar in the cave, where you can try Cappadocia wines.

Turkish Night is also a nocturnal option that has a more touristic facet. People who participate in this activity have a dinner with typical Turkish food, dance and music. It is an alternative to learn more about the culture of Turkey.

Cappadocia is a region made up of different cities and towns. Choosing the right place to stay is important, as the tourist spots are far from each other and because, generally, those who go to the place stay for a few days, so a good location means saving time on the move. If you don't have a car, it's also important to choose a place where you can do some walking activities.

Among the options of cities to stay in Cappadocia are Göreme, Ürgüp, Uçhisar and Avanos, with about 13,000 inhabitants. The closest airports are in Nevşehir and Kayseri, but they are not places we recommend staying, because they are further away.

Accommodation in Cappadocia is reasonably priced and, even during the summer, we find hotels with great value for money. Generally, they are small hotels, with few rooms and, therefore, have a more personalized service. The hotels in the caves are a strong feature of the place and they are really cute! They have a more rustic appearance, but don't be fooled, there is no lack of comfort if you choose a good hotel! If you can, stay in a cave hotel. The travel experience will be even more amazing.

Among the two most highly recommended places to stay are Göreme and Ürgüp.

Don't forget to use Bitbook.net to find the best deals and of course to get some cashback that is always rewarded for those who book with Bitbook.net.

Want to have the best vacation of your life? So book your trip to Cappadocia now!

Here at bitbook.net you will find numerous accommodation options with the best prices, to enjoy the best Cappadocia has to offer.

Remember that Those who book their trip through Bitbook ALWAYS benefit with cashback!!

With Bitbook you can Explore the World and Earn Rewards.

*All images used in this article are Copyright Free and Royalty Free Images.